40 Years of P.S.I. and the Records Tumble Again 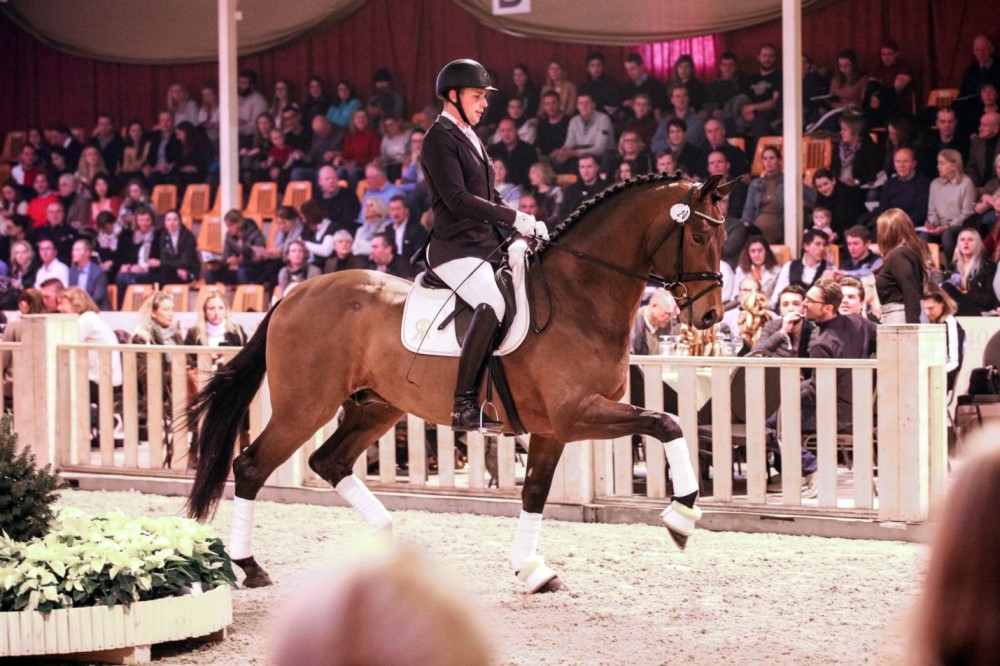 (Ankum) The Auction Hall at Ankum was packed this Sunday, 8 December. And while the weather outside was cloudy and rainy, the atmosphere inside the famous well-lit Auction Hall was electric. 49 top quality sport horses for dressage and showjumping were presented in front of an international audience of expert buyers, professional riders and long-standing supporters of the sport, who had come together to celebrate the 40th anniversary of P.S.I.

The first horse to go through the ring was catalogue no 20, V-Plus Gold, a full brother to Harmony’s V-Plus, the top price of the 39th P.S.I. Auction. Frederic Wandres showed this imposing son of Vivaldi out of the mare Farah, who also brought us last year’s Auction highlight, So Fantastic. Within minutes bidding broke through the magical 1 million Euro barrier until auctioneer Hendrik Schulze Rückamp brought the hammer down at 1.3 million Euro. The Luxembourg-based stable Dressage Grand-Ducal. Frederic Wandres will continue to ride this exceptional stallion with the goal of qualifying for the World Championships for young dressage horses.

The bar was set, but the pace didn’t slow down for the next three hours. The highest selling jumping horse, Chacco’s Lando (Chacco-Blue x Lando) followed soon after. The exquisitely bred stallion is closely related to Ukato who has gained great success with Willem Greve or the amazing Explosion W with Ben Maher. He sold for 1.25 million Euro.

V-Plus Gold was also one the personal highlights for P.S.I. founder Ulli Kasselmann. “I know all the horses very well, but V-Plus Gold in particular has developed enormously over the past few months and is now going into the best of hands. They have been great friends of the P.S.I. and have also given us the opportunity to continue his further training and preparation for the big sport.”

Paul Schockemöhle was also delighted with the outcome of the event and commented on the quality of the collection, “There are several horses, who have the talent to make it to the very top of the sport. I can’t name a particular favorite, however I owe a great deal of success to a horse that no longer stands in the public spotlight. Askan. Catalogue no 39, Chadonia PS is from the same family and has the potential to follow in her famous relative’s footsteps. I am sure we will see her again.”

The founders of the famous P.S.I. brand can be proud of their achievements tonight, Paul Schockemöhle commented, “The horses are getting better and better, prices have changed, the sport is evolving and we have to keep up with the times. But looking back at how the P.S.I. Auction has progressed, I think we have achieved that!”

Hendrik Schulze Rückamp felt honored to lead through the 40th anniversary auction, but was quick to point out, “Uwe Heckmann has auctioned off 1,786 horses in his time, I have only sold 150 — I have a long way to go still!”

The P.S.I. ball also included a very special and emotional moment for Paul Schockemöhle  und Ullrich Kasselmann. Francois Kasselmann und Vivien Schockemöhle used the occasion of the anniversary auction to honour their fathers for their lifetime achievements — a gesture they promptly returned to show their gratitude and trust into their children.  But although the younger generation have already shown that they are more than capable of taking over the reins, they are also very much in agreement that they want to see their fathers up on the auctioneer’s podium for as long as possible.