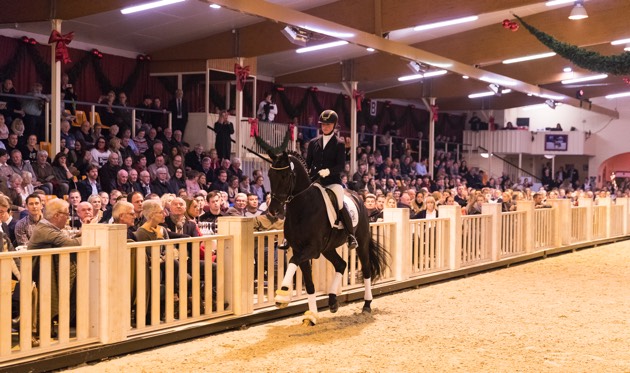 Thousands of thrilled spectators filed into the packed auction hall and watched the highly anticipated 39th Performance Sales International auction. Hosts Paul Schockemöhle and Ullrich Kasselmann succeeded once again in putting together a collection of unique diamonds, that were sold to clients from all around the world. Even though the preparation was flawless, Ulli Kasselmann, as host, breeder, and seller, always feels the pressure: “These days you never know where things are going, and how the buyers will react, we have however found that the name P.S.I. carries great weight worldwide.”

Stakkariealla is the most expensive jumping horse ever sold in the 39-year history of the P.S.I. Auction, although dressage horse Poetin (by Sandro Hit x Brentano II) still holds the alltime record of 2.5 million euro at the 2003 edition.

The second most expensive horse was the 4-year old Oldenburg dressage stallion V-Plus (by Vivaldi x Furst Romancier) which sold for 1.2 million euro to American Leslie Malone of Harmony Sporthorses in Colorado. Susan Pape will train the horse.

“This is a stallion with extraordinary quality and exceptional character. His aura is magnified into everything and the buyers were fascinated by him,” said Ulli Kasselmann knowingly about this once in a lifetime stallion.

The third most expensive horse was show jumper Centolina Seconda, which sold for 850,000 euro. The stunning Forza (by Furstenball x Sir Donnerhall) sold for 630,000 euro to RS2 Dressage in The Netherlands.

The Bundeschampion Bitcoin (by Bordeaux x Rubinstein) sold to a German sponsor for 470,000 euro who will keep the horse in training with Frederic Wandres at Hof Kasselmann.

Harmony Sporthorses also bought a second horse, Bocca di Bacco (by Bordeaux x Sandro Hit). Malone paid 450,000 euro for this one and Michael Klimke will get the ride on him.