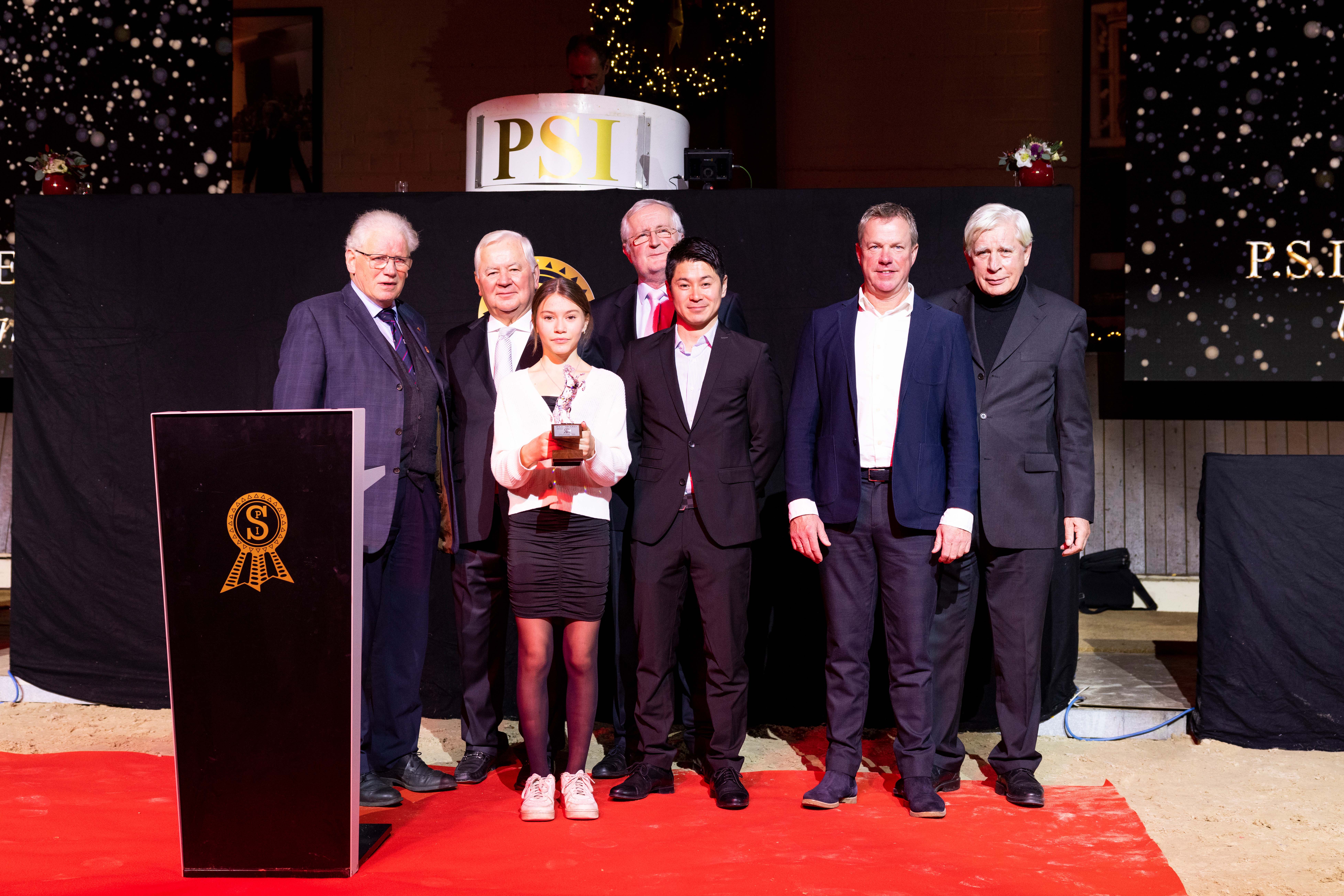 Ankum – Two outstanding personalities of equestrian sport were presented with the traditional P.S.I. Award, a crystal figurine from Swarovski, at the 43rd P.S.I. Auction. The Dutch show jumper Wim Schröder was awarded in the sports category. The 2004 Olympic participant prepared the Japanese jumping riders for the Olympic Games in Tokyo along with Paul Schockemöhle. It was his first assignment as trainer, but a task he mastered with flying colours: In the qualification for the individual final, all three Japanese riders managed to qualify for the final. In the Olympic individual classification, Daisuke Fukushima, Eiken Sato and Koki Saito placed among the top 25! Fukushima even made it into the top six riders of the jump-off with Chanyon. All three of them stood out with stylistically fine rounds and confidently jumping horses. Unfortunately, Schröder tested positive for Covid immediately before the Games and was unable to travel to Tokyo himself. Instead, he coached his riders daily via Facetime. The eulogy was given by team rider Eiken Sato, who pointed out the special success for his home country as host of the Games: “Wim Schröder knew how to improve the team spirit significantly, and the entire Japanese team would like to thank him for our placement in the top 25 in Tokyo 2020.”

More than a star auctioneer

This year, the P.S.I. Award Lifetime Achievement went to a living legend – Uwe Heckmann. The famous hippologist was active as auctioneer and auction manager in Vechta for no less than 40 years and left his mark on Oldenburg breeding like no other. The rosewood hammer was his magic wand, the auction desk his magical realm. Thanks to his unique charisma, Heckmann always managed to unite breeders, riders and supporters. Not only in Oldenburg, but also for Holsteiner, Trakehner and many other breeding areas he let his hammer drop. Celebrated as a star auctioneer, he achieved top prices all over Europe. Heckmann has been friends with the Kasselmann family for over 50 years. No wonder that Ulli Kasselmann engaged him for the P.S.I. Auctions in 1983. Until 2016, Heckmann auctioned 1,796 horses under the Performance Sales International banner. His exciting auctions in aid of the charity initiative “Riding against Hunger”, which supports selected projects of Welthungerhilfe, are also remembered.

For health reasons, Heckmann was unfortunately unable to come to Ankum himself, to the very arena in which he himself guided the fortunes of the P.S.I. Auction so many times. However, two of his close associates were on hand, former President of the Oldenburg Horse Breeders’ Association, Maximilian Graf von Merveldt accepted the P.S.I. Award and current president, Dr. Wolfgang Schulze-Schleppinghoff gave the laudatory speech. He said: “He was not only a successful auctioneer, he also entertained us brilliantly! He is eloquent, innovative, captivating – but was above all one thing: a true horseman with a trained eye.”

Since 2004, outstanding achievements in and around equestrian sport have been recognised annually at Performance Sales International. Yet only a few people are allowed to call a P.S.I. Award their own. The unique horses made of precious Swarovski crystals can be awarded in the categories Sport, Lifetime Achievement, Media and Supporter.